Ajit Doval was seen exchanging an elbow bump with US Secretary of State Mike Pompeo.

The meeting at South Block lasted for 40 minutes ahead of the third edition of 2+2 ministerial dialogue. Mr Esper and Mr Pompeo arrived in India on Monday for the crucial talks aimed at further boosting the defence and security ties between the two countries.

Mr Doval was seen exchanging elbow bumps with the US leaders; all of them were wearing face masks. Mr Pompeo’s mask had the print of the American flag. 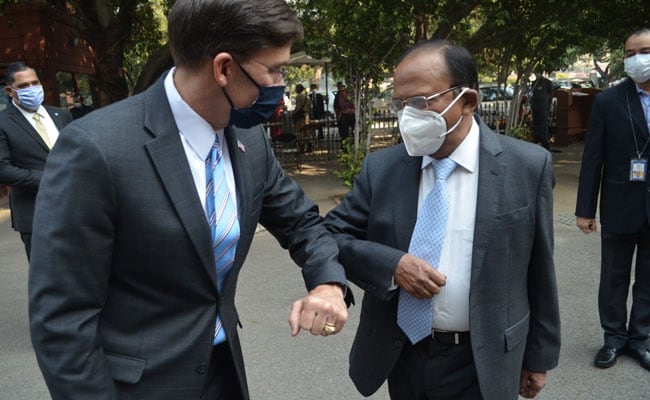 Ajit Doval and US Defence Secretary Mark T Esper greeted each other with an elbow bump.

“They discussed a number of issues and challenges of strategic importance. Both sides highlighted the need to take forward shared objectives and build capabilities across all domains so as to ensure a safe, stable and rule based regional and global security environment,” a senior bureaucrat told News Wrap. Senior officers from both sides were present at the meeting. Indian officials said the two sides also spoke about India’s military stand-off with China’s People’s Liberation Army that has continued for 175 days. Tension peaked in June when 20 Indian soldiers were killed in the line of duty in a clash with the Chinese at Galwan Valley.

Fist bumps, elbow bumps and the traditional Namaste have emerged as popular forms of greeting among world leaders in an effort to reduce the risk of a virus spread. The US remains the country hit hardest by far by the health crisis gripping the world, with over 4.34 Covid cases. India ranks second with over 79.46 cases. 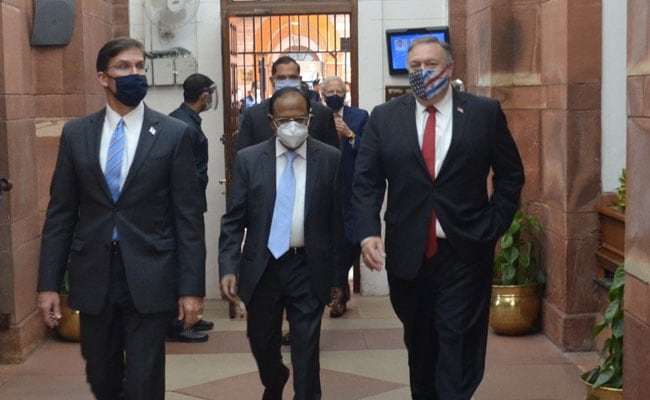 Defence Minister Rajnath Singh and Foreign Minister S Jaishankar held the 2+2 talks with their US counterparts, during which the long-awaited Basic Exchange and Cooperation Agreement or BECA, which gives India access to classified geo-spatial data as well as critical information having significant military applications from the US, was signed.

Your password reset link appears to be invalid or expired.

To use social login you have to agree with the storage and handling of your data by this website. %privacy_policy%